By the Children’s Health Defense Team

Just as COVID-19 (reportedly caused by the new coronavirus, SARS-CoV-2) has dominated the news cycle in 2020, so, too, the focus on an eventual coronavirus vaccine has crowded out needed attention to a wider range of prevention and treatment strategies. Self-appointed pandemic guru Bill Gates—through a complex tangle of direct and indirect funding mechanisms that includes being the World Health Organization’s (WHO’s) second largest donor—is gleefully leading the contingent promoting planet-wide coronavirus vaccination, unashamedly asserting that a vaccine “is the only thing that will allow us to return to normal.” Gates has the effrontery to make such claims despite financial conflicts of interest blatant enough to be noticed even by the credulous, and a lengthy trail of vaccine-related destruction left in the wake of Gates-funded vaccine programs around the world.

Globally, roughly 70 COVID-19 vaccines are in various stages of development—a veritable gold rush that will be all the more lucrative since Gates has made sure that the vaccines will be indemnified against lawsuits. Gates funding, through the Bill & Melinda Gates Foundation and the Coalition for Epidemic Preparedness Innovations (CEPI), is helping to spur the accelerated development of some of the leading contenders, including two of the three experimental vaccines rushed into Phase I trials in humans without any preliminary testing in animal models. (A third experimental vaccine will soon proceed to Phase II trials in China.) The National Institute of Allergy and Infectious Diseases (NIAID) is running the trial of one of these vaccines (mRNA-1273), co-developed under CEPI sponsorship with Cambridge-based biotech firm Moderna. Meanwhile, Pennsylvania-based Inovio Pharmaceuticals is conducting a Phase I trial of INO-4800, a vaccine being developed with massive infusions of funding from both the Gates Foundation and CEPI.… Kim warned that even when vaccine makers appropriately begin the process with animal studies, “vaccine development is characterized by a high failure rate of often 93%.

In early April, Dr. Jerome H. Kim (Director General of the United-Nations-affiliated International Vaccine Institute) called attention to the “unprecedented speed” with which the Phase I trials launched, stating that it will be difficult to know whether a vaccine developed in a scant four, 12 or even 18 months “is really safe” and noting that the vaccine development process ordinarily takes anywhere from five to ten years. Although striving for enthusiasm about the “remarkable” speed-up, Kim warned that even when vaccine makers appropriately begin the process with animal studies, “vaccine development is characterized by a high failure rate of ‘often 93%.’”

Dr. Kim’s words of warning are far from theoretical. In the mid-to-late 2000s, scientists engaged in an ultimately futile effort to develop a vaccine to address the first SARS-related coronavirus (SARS-CoV). Researchers of the day developed four SARS-CoV vaccines that underwent testing in animal models and two (described in 2007 and 2008) that proceeded to Phase I trials in humans. The less-than-reassuring results of the animal studies, in particular, prompted one set of researchers to conclude that “Caution in proceeding to application of a SARS-CoV vaccine in humans is indicated” [emphasis added].…all of the vaccinated mice, irrespective of the type of vaccine or the presence or absence of aluminum adjuvant, displayed unique lung damage not seen in the control mice …

In 2012, Texas researchers with combined expertise in molecular virology, microbiology, immunology, biodefense and emerging diseases reported in the journal PLoS ONE on their evaluation—in mice—of four candidate vaccines designed to prevent SARS-CoV. All four vaccines had run into trouble in earlier experimental studies, which showed that the vaccines had a tendency to induce pathologic lung reactions in the unfortunate recipients—whether mice, ferrets or nonhuman primates.

The Texas scientists reevaluated the safety, immunogenicity and efficacy of two whole-virus vaccines prepared in Vero tissue or Vero cell cultures (from African green monkey kidney); one recombinant (genetically engineered) DNA spike protein vaccine produced in insect cells; and their own virus-like particle (VLP) vaccine containing SARS-CoV proteins as well as mouse hepatitis coronavirus. They also compared versions of the vaccines containing an aluminum adjuvant with adjuvant-free formulations. The research team injected the experimental groups of mice with vaccine on days zero and 28, exposed them to live SARS-CoV on day 56 and sacrificed them two days later (day 58) to examine the lungs for virus and histopathology, comparing the experimental mice to control groups.

All four vaccines appeared to induce antibodies against SARS-CoV two days after exposure to live virus. However, the second set of results—the findings that persuaded the researchers to urge the utmost caution in proceeding to human testing—showed that all of the vaccinated mice, irrespective of the type of vaccine or the presence or absence of aluminum adjuvant, displayed unique lung damage not seen in the control mice, and the pathology occurred in the absence of any detectable SARS coronavirus in the lungs. The researchers described this “Th2-type immunopathology”—indicated in part by abnormal levels of white blood cells called eosinophils—as suggestive of vaccine-induced “hypersensitivity to SARS-CoV components.” 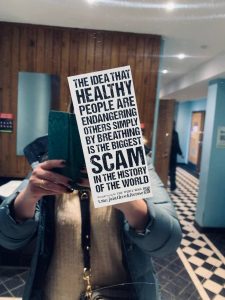